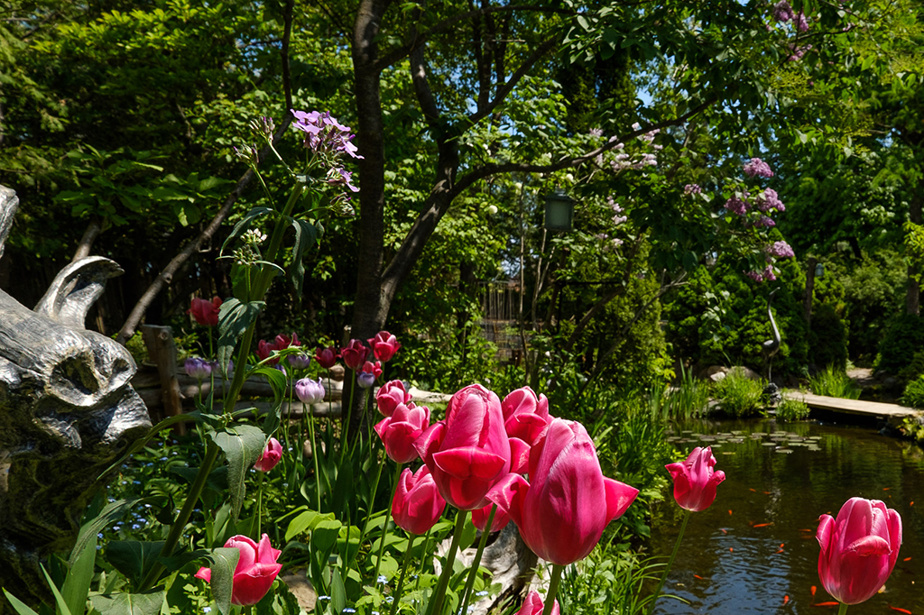 A garden that started from nothing

“I try to create, in miniature, a much bigger universe,” he explains.

In 1989, there was absolutely nothing around his brand new house when he took possession of it. He bought soil from the excavation of another house nearby to upgrade his 8,800 sq. Ft. Lot.2 (817 m2), shaped like a pie slice. Most of it being at the back of the house, he rolled up his sleeves.

“There wasn’t a blade of grass,” he recalls. There was no tree. I learned a lot along the way. There are things that I have done, that I have undone or that I have changed. ”

Two years after moving in, he had a pond dug a dozen meters (forty feet) long. “You could swear he’s always been there,” he says proudly.

He dressed the surroundings according to his findings, always taking care to create an impression of depth by putting certain elements in the foreground and others in the background.

He took advantage of an Alberta spruce sale at a hardware store, at $ 2 per specimen, about 25 years ago. He bought 24. But most of the time, he opened his eyes and got hold of plants or stones as his neighborhood grew.

“The development was done according to the opportunities,” he reveals. Not very far, there was a very beautiful woodland, which has obviously been leveled. There were all kinds of undergrowth plants in it, ferns, trilliums, erythrones. In the spring, when the chainsaws were gone and the bulldozers were about to arrive, I would go and collect some plants and put them here. They were plants that were going to disappear anyway. I let nature go, but I removed some because they were too invasive. It is constantly evolving. ”

The clayey condition of the soil led him to create trails. He started by using the rocks that were on his land, then he opened up his horizons, going to draw some in the surroundings during the excavations carried out in the area. His partner, André Chalifour, helped him a lot to carry out this work, he says.

He also learned to prune and cut cedars, which have become very imposing. Purchased at the very beginning, they delimit the land at irregular intervals, without necessarily being glued to the fence.

“There was a lot of shade,” he says. I started by doing a test. I took four or five, took about 25ft off them to bring them down to 6ft and see what it was going to be like. When I saw the results, I cut down a lot of the cedars to get more light.

In another section, he created a vegetable garden. It could not have been otherwise since as a child, he helped his parents in their vegetable garden and he has always had one. A recreation area, with a swimming pool, a terrace and a place to eat, also occupies another area.

The land is not huge, but it feels like it is very, very large. Having a relief makes the landscape interesting.

When he is near the pond, he feels at the edge of a lake surrounded by a small spruce forest at the back. Everything is there, down to the moss taken from his cottage and the old tree stumps that he and his partner picked up at the bottom of a lot, discovered while they were camping.

“I put it in different places,” he reveals. They bring a wild side. ”

They reinforce what he has been trying to create for so long: the impression of being in the heart of an ancient forest, typically Quebecois.