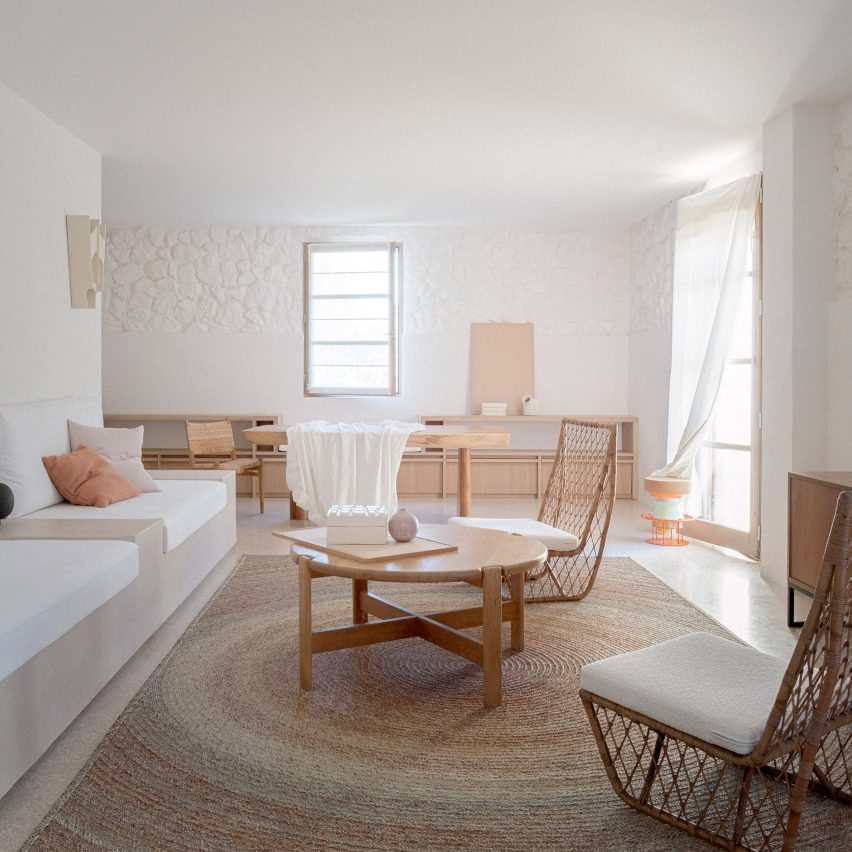 Continuing our yearly review, Dezeen has selected the top 10 home interiors of 2020 – including a rustic home in rural France and a multicoloured Tokyo apartment.

This dwelling, which architect Timothee Mercier built for his parents, is meant to be aesthetically harmonious with the rural landscape of Vaucluse, France.

Inside there’s whitewashed walls and just a smattering of rustic furnishings, which Mercier either found in Parisian flea markets or had custom made.

“I decided early-on to infuse the house with the monastic qualities of its surroundings,” he told Dezeen. “[The house] had to be a spectacle, but a discrete one.”

Find out more about MA House ›

Bricks salvaged from the ruins of an 80-year-old property now line the interior of House V, which is situated in the Slovakian capital of Bratislava.

The time-worn bricks cover walls in the living room, bedroom and even the master bathroom, where a freestanding tub has been placed beneath the peak of the home’s pitched roof.

Find out more about House V ›

To open up the constricted floor plan of this Kyiv apartment, Ater Architects demolished partition walls and replaced them with cobalt-blue curtains.

The curtains – and the pink grouting between the kitchen tiles – offer a shock of colour amongst the otherwise monotone interior, which has white-painted walls running throughout.

Find out more about the EGR Apartment ›

Having lived in a poky London flat for eight years, architects Joanne and Luke McClelland set about making the rooms inside their Edinburgh apartment as bright and spacious as possible.

The pair painted surfaces white, widened doorways to let in more sunlight and opened up the kitchen to include a dining area. Commenters were particularly impressed with the high-end look of the kitchen’s wooden cabinetry, which was actually sourced from IKEA.

Find out more about the Edinburgh apartment ›

Naturally flawed materials feature inside this Hong Kong apartment, which draws on the values of wabi-sabi – a Japanese philosophy that encourages finding beauty in imperfection and transience.

Jagged offcuts of marble have been set into the floor, while oxidised copper has been used to make custom lights or decorative panels. Beige plaster also gives the walls a slightly uneven surface finish.

Find out more about Imperfect Residence ›

Commenters loved the personal feel of architect John Wardle’s Melbourne home, which he decided to revamp after his three children grew up and moved out.

At the heart of the plan is now a “cocoon”-like study where Wardle displays books and ceramic ornaments that he’s collected over the years. The architect also made sure that his favourite type of wood, Victorian ash, was used for all of the home’s joinery.

Find out more about Kew Residence ›

A daybed that doubles up as a storage box and a wardrobe that hides a washing machine are some of the handy space-saving elements that feature inside this tiny guest cabin, which occupies the porch of a home in Bergamo.

Architect Francesca Perani made the unusual decision to line the 25-square-metre interior with OSB – a material she had previously only seen used on construction sites.

“I love its textural irregularity, random organic composure and recycled properties,” she explained.

Find out more about Urban Cabin ›

Tasked with turning this lack-lustre Tokyo apartment into “a place of happiness, joy and lightness”, designer Adam Nathaniel Furman applied vivid, food-inspired colours to its interior.

The kitchen has watermelon-green floors, while the dining area has lilac carpet that looks like icing. “Zesty” lemon-yellow taps and milky orange tiles also appear in the bathroom.

Find out more about the Nagatachō Apartment ›

Prefabricated panels made from hempcrete – a mixture of hemp and lime – were used to construct the structural shell of this zero-carbon house in Cambridgeshire.

Find out more about Flat House ›

Casa A690, Mexico, by Delfino Lozano

Architect Delfino Lozano fashioned what he describes as a “Mexiterrean” aesthetic for this 1970s property in Zapopan.

Lozano says that whilst the home’s architecture is traditionally Mexican, the interiors appear more Mediterranean because of his use of “simple and pure” materials. Almost every room boasts plain, white-painted walls and built-in wooden furniture.