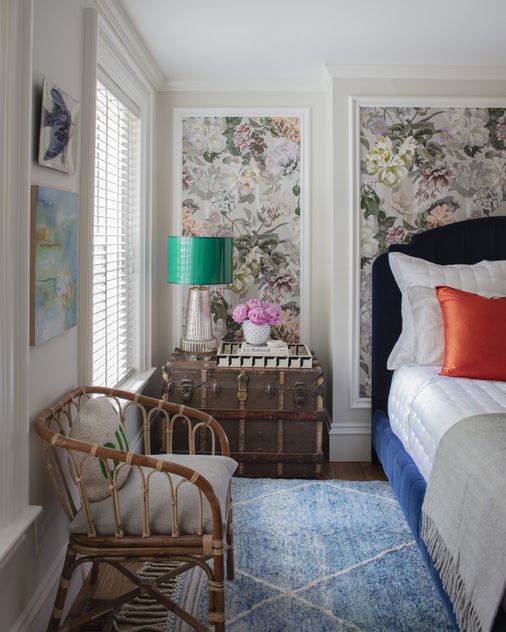 Home design inspiration: A bold choice for a redesigned bedroom

What to do when your client asks for a serene bedroom but wants it to reflect her not-so-quiet style? Mix elements that speak to both sensibilities. After sealing up shelves that were carved into either side of the bump-out wall and applying molding for architectural interest, Thiara Borges Dananberg added panels of painterly floral wallpaper in soothing hues. From there, she layered in jewel-toned furnishings. “I tend to emulate a client’s personal style by echoing accessories they might wear; she always has a cool piece of jewelry on,” says the founder of Studio Borges Interior Design. “The bed, the lampshade, and the pillows are an extension of her polished, but cool, eclectic look.”

1. The hand-knotted Moroccan rug from Landry & Arcari adds color and texture underfoot while simultaneously softening the impact of the bed. “It’s in the same color family as the bed,” Dananberg says, “but dialed down.”

2. The rattan chair draws attention to the abstract painting by New Bedford-based artist Alyn Carlson. “The art is a union of all of the colors happening in the space,” Dananberg says.

3. The glossy lacquered lampshade and shine of the mercury glass lead the eye to the outer edge of the room. They also counterbalance the masculine feel of the antique chest. “The emerald green shade is meant as a jewelry moment,” Dananberg says.

4. The large-scale floral of the Designers Guild wallpaper works even though the room is small because the color scheme is muted. Dananberg says, “It’s a bold pattern in a peaceful palette.”

5. The custom channel-tufted velvet bed anchors the room without overwhelming it. “The blue is an intentional departure from the wallpaper,” Dananberg says. “We didn’t want the colors to match.”

6. The pomegranate color of the silk throw pillows is an amped-up version of the peachy tones in the wallpaper. “You get some orange in the petals when you look closely,” the designer says.

Marni Elyse Katz is a regular contributor to the Globe Magazine. Send comments to [email protected]