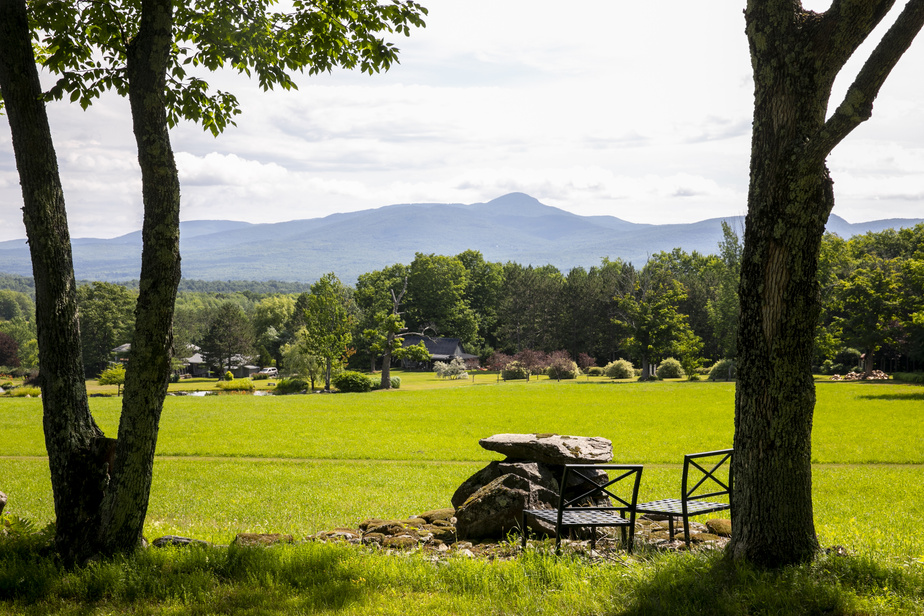 “Our garden is a mixture of two creativities”

Claude Girard meticulously traveled the Eastern Townships in 1976 before finding exactly what he was looking for: a house in the heart of a huge open space, with an extraordinary view of nature and the surrounding area. Almost 45 years later, the 130-acre land bears her mark and that of her husband, Maurice Ferland.

“I’ve always thought that you can discover people through their garden,” says Maurice Ferland, who left Montreal 24 years ago to settle full-time in Abercorn, not far from Sutton. We are two designers. Our garden is a mixture of two creativities. ”

He talks about shapes and angles, much more than flowers. “We worked a lot with nature and what grows naturally,” says the man who was a fashion designer for a long time before turning to cooking and sculpture. He expresses his creativity at all times, even when mowing the lawn. He is organizing himself so that it is beautiful!

Claude Girard notably worked for the Opéra de Montréal as a scenographer. First during the weekends, he rolled up his sleeves to establish the base of a very large garden, keeping the space open. For 15 years, he drained the land. He had a first pond dug, fed by a natural spring. Two more were added on two lower levels, cascading one into the other. The third, the largest, is the one in which the couple bathes.

Everyone has their favorite places. Claude Girard, who takes care of the flower beds and the maintenance of the trails in the forest, enjoys taking long walks with their dog, West. Maurice Ferland, who is 13 years younger and takes care of mowing the grass and pruning the trees, is particularly fond of a shady corner near the house, where the apple trees resemble olive trees. “It’s like being in Italy, in Tuscany,” he says.

Over the years they have created different zones, being careful that there is unity. “Everything is integrated, says Maurice Ferland. It’s big. The gardens overflow into one another. Like the ponds.

We’re calmer now. We purify and we remove, more than we add. We are at the maximum of what we can maintain. Everything is mature. We enjoy it more. The big job is done!

Born in Lac-Mégantic, he realized a long time ago that he was not a city dweller. He was more bored when he lived in Montreal than in the countryside, he reveals. It must be said that the grounds maintenance does not leave him much time. “There are benches and chairs in several places, but we don’t sit down a lot,” he says, laughing.

The place allows him to give free rein to his creativity. He likes to experiment. Concrete is currently the focus of his attention. At another time, he was more making metal sculptures. Several of his works are visible in the field, as are those of his spouse. They each have their own style and work differently on materials that are not the same. Claude Girard’s works are in carved wood, while those by Maurice Ferland are assemblages of salvaged metal pieces or old beams from the ceiling of the former Philipsburg general store, now part of Saint-Armand, purchased when ‘they have been put up for sale.

“I am a great bisouneux, specifies Mr. Ferland. I must work with my hands. I have to move the material for it to take shape. Over time, the material has varied, whether it was the fabric when I was in fashion, the food when I had a cookery workshop, the metal and now the concrete. I still make jewelry, sold in Sutton. ”

Trees must be added to his list of preferred materials, since he masters the techniques of pruning the roots and leaves of bonsai trees, as well as branches.

With the major works behind them, the two accomplices take advantage of the view of Mount Sutton and their ponds. In winter, they even see Mount Jay Peak.

“We have a large field,” explains Mr. Ferland. When we come out of the forest, it’s like in The melody of happiness ! ”

They feel great well-being. They reap what they sowed.