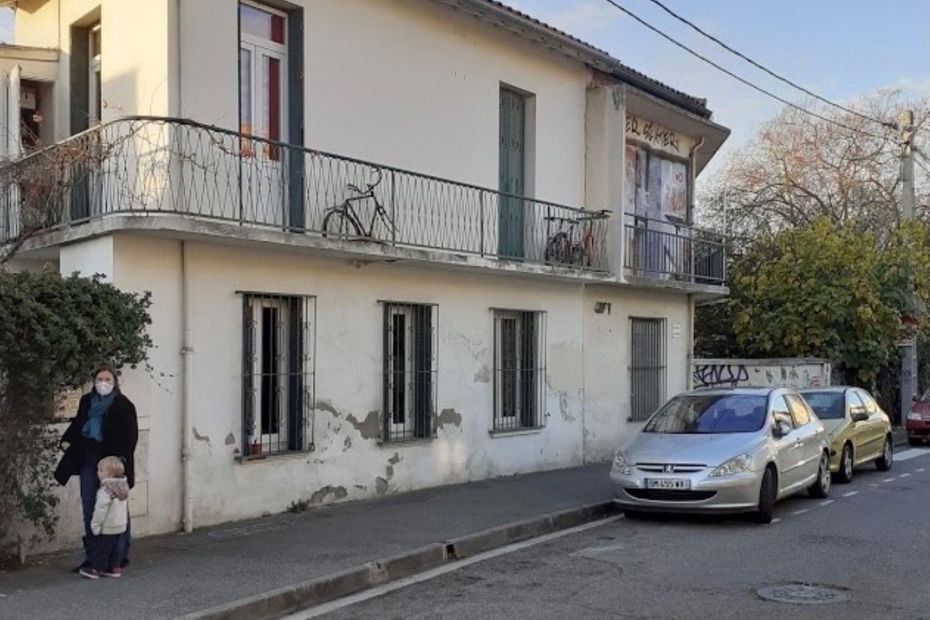 tenants want to save a house from demolition, a place of memory of the Toulouse resistance

This small house located at 17 chemin Lapujade is threatened with destruction by the city of Toulouse as part of the new urban project of Matabiau Bonnefoy. The tenants try to save her, she who has so resisted and served as a “hideout” under the German occupation.

It is a small workers’ house from the early 20th century, a piece of popular history that does not bother anyone

explains Jean-François, the tenant of 17 Lapujade Road
It is a house, a forgotten time and which today is in danger of demolition. Located at 17 chemin de Lapujade in the Bonnefoy district, the little house played an important role during the Second World War. It housed the clandestine activities of a Toulouse group of FTPF and notably served as a refuge for the resistant Louis Taudou.
This peaked house is located near the railway tracks and the Dewoitine factory, its tenants Christelle, Jean-François and their three children are trying to save it from the clutches of the excavators.

We are very attached to it, we feel good with our children, it is a place full of history, it is a duty of memory to preserve it, it cannot be reduced to a commemorative plaque.

Victim of the rehabilitation of the Bonnefoy Matabiau district

Tenants since 2012, Christelle and Jean-François were informed of the sale of the house last May. Very attached to this small piece of land, 76 m2, they give it a go and make an offer to the owner which will be accepted. They don’t roll in gold but get bank credit. The town hall of Toulouse will put a stop to their dream. In October, the family had the bad surprise of receiving a letter announcing the city’s wish to preempt the sale and destroy the house on the grounds of “extending the Lapujade garden”, a garden located a little further from the house.

The earthen pot against the iron pot ?

The family supported by the inhabitants of the district and associations of former resistance fighters would like to keep the right to acquire this house.
“This house, it is in good condition. If the owners have not maintained the facade, since 2012 we have obtained that the roof is renovated (frame and roof), that the doors and windows are changed and that the boiler is replaced “, says Jean-François.
The family also wishes to restore the facade in the event of acquisition: “we want to stay in our neighborhood with our three children“.

This house is not an apartment in the middle of a crumbling building bar. It’s a house at the end of the street and I don’t see why the town hall is obliged to demolish it. Before an administrative building was attached to it, there was a garden. Returning to this initial situation would not bother the neighbors or any urban project.

The family comes into resistance and creates a Facebook page to inform neighbors and associations of their situation. “Real estate projects in the Bonnefoy district unfortunately exclude the poorest, new constructions are inaccessible to our low budget and leaving your home is suddenly moving away from the city and we are fine here, we want to stay there“.

“We hope that the garden project which is mentioned by the town hall of Toulouse, does not integrate our house“. Jean-François and Christelle only wish to keep the 76 m2, “in other words, nothing at all in an urban project“, adds the tenant.

Place of “memory of the Toulouse resistance”

The young resistant Louis Taudou who worked at the Dewoitine factory in Minimes, was housed there during the Second World War. In his book “Libérer Toulouse”, he relates episodes lived in this house. Notably the descent of the Gestapo in 1944. The Germans searched the house in search of “terrorist activities” but found nothing. Louis Taudou had time to hide the camera in the fireplace and escaped arrest. Later he created the artist group “Tournée 17-13”, a cover for resistance fighters fighting against the Nazi occupation.

Many other still little-known stories deserve to be highlighted. The family receives letters from children of resistance fighters in which they testify to the role of their little house in the history of the resistance in Toulouse. The son of a resistance fighter has kept the writings of his father, who was wanted by the Gestapo and who was hiding in the house of Christelle and Jean-François. Her father had fallen in love with the owner’s daughter.

“We are ready to open our house to schools, it is a place of memory“. They would be heartbroken to see it disappear, swallowed up and just replaced for the duty of memory by “a simple commemorative plaque”.

The family remains mobilized, it alerted the mayor of Toulouse Jean-Luc Moudenc as well as the Department of Haute-Garonne. The couple has an appointment this Tuesday afternoon with the elected representative of the Toulouse Metropole. They have until December 9 to request an appeal. A decision they will make after the interview. Everything will depend on how the exchanges take place.